Riding the Italian Alps and Dolomites with Hear The Road

An article written by Ken Freud and published in “Backroads Motorcycle, Travel & Adventure” in May 2017

For true motorcycle enthusiasts, what could be better than combining a comfortable, good-handling motorcycle with a breathtaking ride through the fabulous Italian Alps and Dolomites?

Italy is an amazing country, with a long history, wonderful food and incredible scenery and great hospitality to go with it all. Italian-born Enrico Grassi, the founder of Hear the Road Tours, loves to show his country to others and has spent many years learning the best roads and places to go. His strong passion shows as he proudly introduces visitors to his homeland.

11 days in Italy, discovering the Alps and Dolomites

I sampled an 11-day tour led by Grassi that ran from Rome on a loop north into the gorgeous Alps and Dolomite mountains, through a wide variety of terrain and climate zones. Day one includes time to visit Rome for tourism, pick up the bikes from the rental shop, and a welcome dinner allowing the participants to get acquainted. Our small group included one couple and five solo riders, from all over the world. 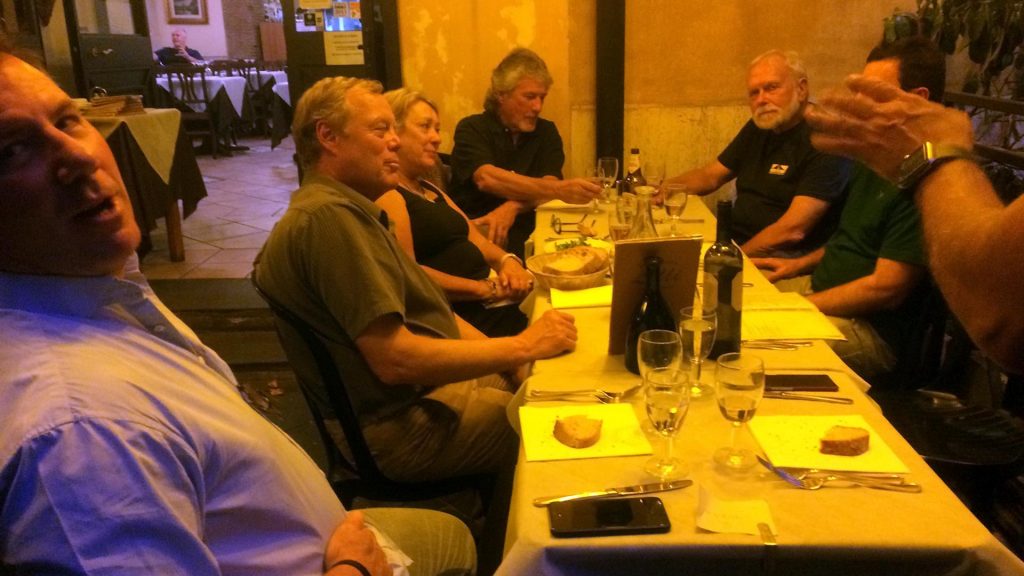 Day two saw us riding 178 miles from Rome to the ancient Tuscan city of Siena, which is the ancient capital of the province of Siena. The road north is fairly flat autostrada, which allows us to get familiarized with the bikes, roads and Italian signs and driving style. Siena, as with other Tuscan hill towns, was first settled by the Etruscans (c. 900–400 BC). Seeping with history, the center of Siena has been declared a UNESCO World Heritage Site and is one of the nation’s most-visited tourist attractions. Here we walk the giant main square, and take in the sights along narrow medieval streets of stone, worn smooth by countless footsteps over millenia. Sidewalk cafes offer a respite before we continue riding.

For day three we continue north 170 miles from Siena to Modena, through the Chianti wine region, past Firenze (Florence) and over Abetone Pass. Modena is a large city on the south side of the Po Valley, in the Province of Modena in the Emilia-Romagna region of northern Italy. This too is an ancient town, now known for its famous sports car manufacturers; De Tomaso, Ferrari, Lamborghini, Maserati and Pagani have all been located in this area. It’s been a hot day and it feels good to take our riding gear off and quaff a cold drink…or three with dinner! 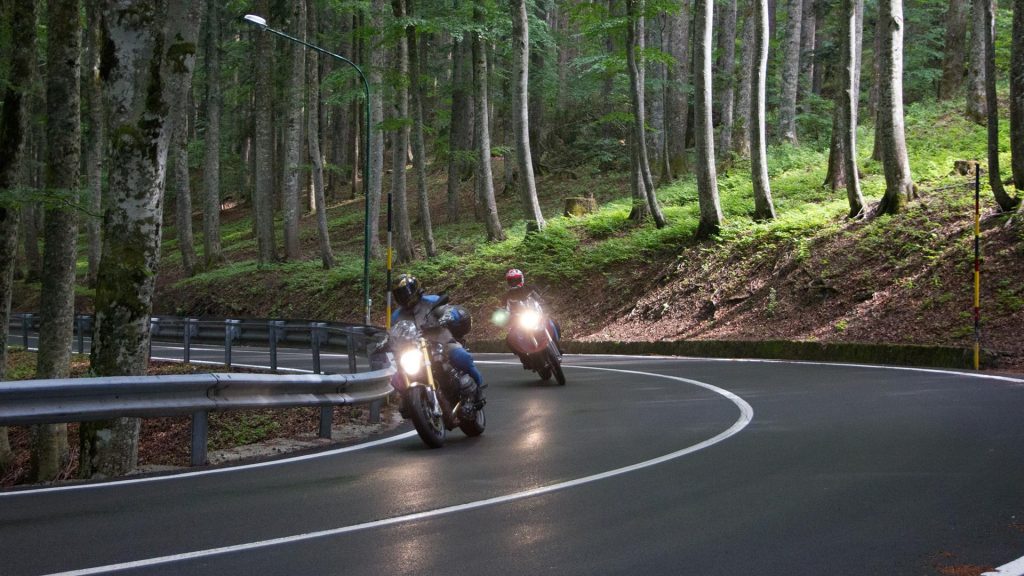 On day four, we go approximately 200 miles from Modena to Hotel Pieve di Piscogne, a lovely four-star lodge near the historical center of Pisogne in a low hilly area above the lake. Enroute, we spend hours skirting huge Lake Garda, Italy’s largest, which is bustling with speed boats. Later we skirt Lake Iseo, then traverse lovely Maniva Pass, which is a sign of things to come as the mountains loom around us.

For day five, our route takes us a brisk 185 miles from Pisogne to Bormio, over the Zambia, San Marco, Maloja, Bernina, Forcola Livigno, Eira and Foscagno Passes. The dis- tance belies the amount of sights and sounds as we twist and turn our way upward. My kind of riding, and a great warmup for Stelvio!

Bormio is a quaint small city located in the Province of Sondrio, Lombardy region of the northern Italian Alps. Thanks to its thermal baths, which are said to have healing powers, Bormio has long been a popular tourist attraction. In fact, ancient-Roman empire aristocrats traveled to Bormio to enjoy the soothing warm baths, many of which are still in use today. The town is built around the historic Piazza Cavour and Via Roma, a historic main trading point on the old trade route from Venice to Switzerland.

Bormio retains its unique medieval town center, attracting many tourists for its proximity to great skiing. Within Stelvio National Park and the center of the upper Valtellina valley, it is a popular winter sports resort that annually hosts the Alpine Ski World Cup and was twice the site of the Alpine World Ski Cham- pionships. But we are here for the summer sport of motor- cycling, and Bormio’s location near the foot of Stelvio Pass also makes it a wonderful base for three nights stay. Stelvio Pass (Italian: Passo dello Stelvio) is the most famous mountain pass in northern Italy, with an elevation of 9,045 feet. That makes it the highest paved mountain pass in the Eastern Alps, and second highest in the Alps, just 148 feet below France’s Col de la Bonette. Stelvio’s 75 hairpin switchback turns – 48 of them on the northern side – are a challenge to negotiate in any weather. We had rain and fog, which takes it up a notch or two! 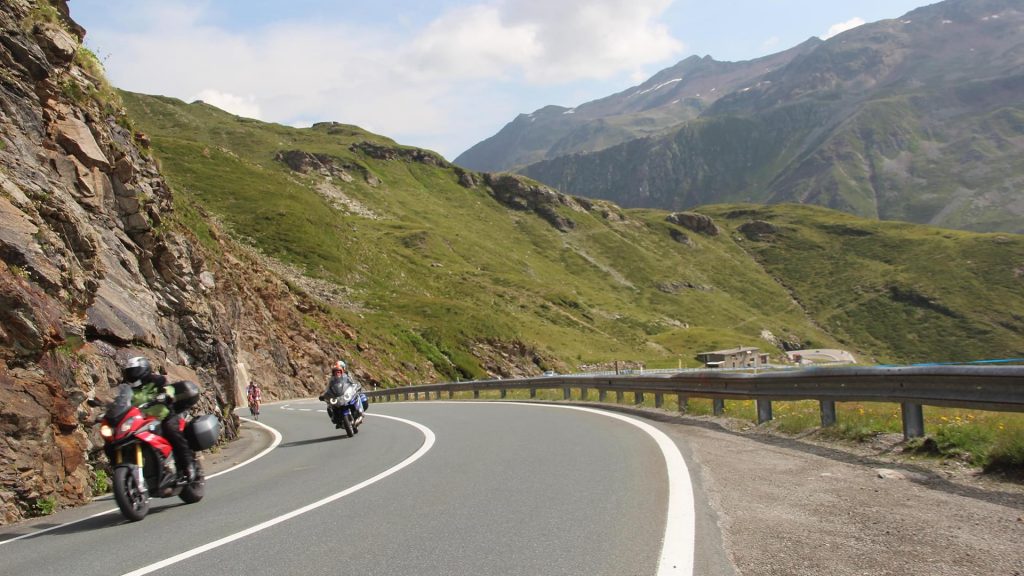 Our day six is reserved for an epic 144-mile loop, which includes a ride up and back over the legendary Stelvio, plus the Umbrial, Resia, Zernez, Livigno and Eira Passes, dip- ping briefly into Switzerland.

Day seven is a free day in Bormio, which of course I put to good use running Stelvio and surrounding mountain roads again, as this area contains some of my favorite scenery and roads in the whole world!

On day eight, we leave Bormio for Canazei, a 181-mile run that takes us from the fabulous Alps to the incredible Dolomite mountains. Our route crosses over the Tonale, Cles, Cavalese, and Lavaze Passes and along Lake Carezza. The rugged and gorgeous Dolomites have jagged, dramatic barren-rock peaks that thrust into the sky, capped year-round with snow at the higher elevations.

Canazei is a quaint mountain town of about 2,000 inhabitants in the far northern Italian region of Trentino-Alto Adige/Südtirol. It’s nestled in the Dolomites which reaches from the River Adige in the west to the Piave Valley (Pieve di Cadore) on the eastern flank. Northern and southern borders are defined by the Puster Valley and Sugana Valley respectively. Here, we again stay two nights, with a day riding a 150-mile loop over a dozen passes through some of the most beautiful scenery and roads imaginable. If I could find a way to live here, I would! 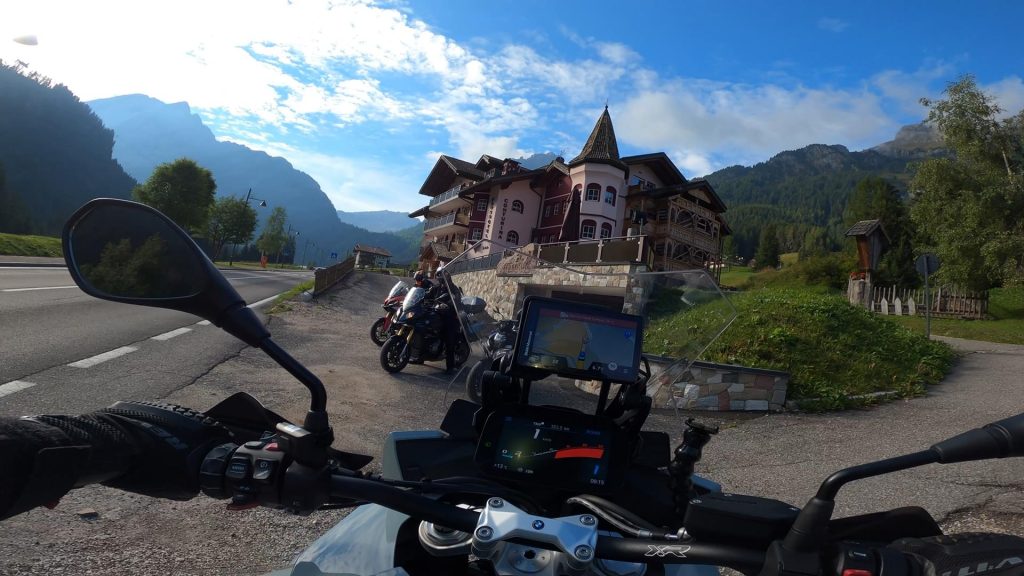 On day 10, the ride from Canazei to Ravenna is 219 miles, crossing Rollo Pass, then through Martino di Castrozza, and Bassano del Grappa – home of Grappa wine. As we leave the mountains, the roads straighten and the higher temperatures at the lower elevations are very noticable, as the sense that the ride is coming to an end begins to set in.

The last day on the road, day 11 brings us south from Ravenna near the Adriatic coast, then on over to Rome, nearly 300 miles and our longest riding distance in a day. However, much of it is on high-speed autostrada, so we still reach the rental shop by late afternoon. Later, we gather for a final farewell dinner and share goodbyes and stories of the trip.

Challenging and conquering the Alps and the Dolomites should be on the bucket list of every serious motorcycle enthusiast. Mountain passes such as Stelvio, Bernina, Fedaia and Giau, along with Umbrial in Switzerland are etched into memory, as the endless curves, valleys, snow-capped peaks and steep breathtaking roads stir the soul.

Looking back on the tour, fond memories of quaint alpine villages, challenging mountain roads with countless curves and switchbacks, crystal-clear lakes and scenic views to die for, come rushing back. Beautiful renaissance cities, tiny medieval hamlets, and ancient vol- canic lakes are all part of the experience. Comfortable lodging, delicious foods and wines, plus in- teresting riding companions complete the package. For this tour, riders must be able to negotiate switchbacks and very tight turns; some of the other tours are not as challenging. But the rewards are also great, bringing a sense of achievement and adventure that only comes with such a two- wheeled journey. 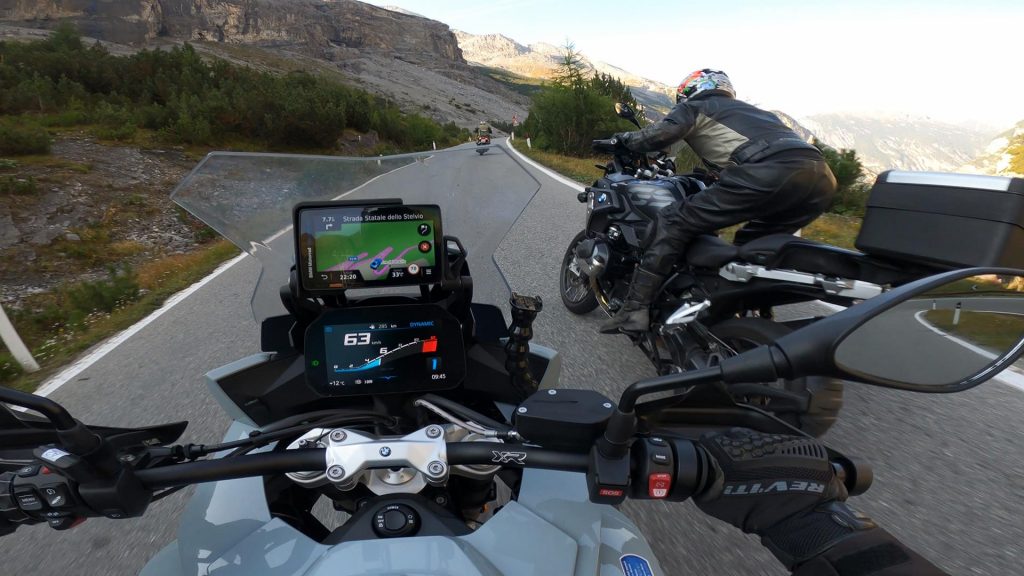 Enrico Grassi, leader and founder of Hear the Road (HTR) Tours is fluent in Italian and English. What makes his tours stand out is the fact that you’re riding with the owner and founder of the company, and his pride and passion for Italy constantly show up. He has spent years scouting and riding the routes, and finding the right lodging and dining experiences for his clients. Our tour came with an excellent book containing the daily routes drawn on maps, along with a free Italian cell phone that can be used to contact Enrico on his mobile phone, make emergency calls, or receive calls from home free of roaming charges. It really came in handy when I got separated from the group after stopping perhaps too long, for photos.

A new but similar Alps and Dolomites tour of eight days and seven nights, with six riding days over 950 miles replaces the tour above. It now starts and ends in Milan, instead of Rome, reducing the time and distance spent on highways getting to and from the mountains.

This article was written by Ken Freud and  published in “Backroads Motorcycle,  Travel & Adventure” in May 2017