Book our tours without risk!
You will be refunded in the event that the tour is canceled or if you are not unable to travel to Italy due to Covid restrictions imposed by your country or the Italian government.
Click here for details

The Mugello motor-racing circuit, in the heart of Tuscany, is one of the best-known international racetracks, especially for motorcycle lovers. This is where the exciting Italian Motorcycle Grand Prix is held every year, and where Valentino Rossi reached World Wide Fame, winning the competition 9 times, 7 of which in a row.

Anyone who is passionate about motorcycling in Italy needs to put a visit to the Mugello racetrack into their bucket list, all the better if you actually get to see the Italian Motorcycle Grand Prix. The Mugello is in Tuscany, not far from the stunning city of Florence: an unforgettable location for all lovers of engines and motor-sports. This is a fantastic way of getting to see the renown speed temple, the place that transformed Valentino Rossi into a true idol.

The Mugello Circuit, active since 1972, is considered an international jewel in motor-sports. The track is fast and exciting, which challenges both heart and muscles of all those who get to race on it. Since 1994 it is the official location for the Italian Motorcycle Grand Prix, as well as hosting several other events, both for cars and motorbikes. In 2020, amongst other things, it was the only venue (to date), that hosted the Formula 1 Tuscany Grand Prix, a venue added to the competition in order to guarantee a minimum number of races during the Covid19 pandemic. But the Mugello Circuit is best-known as Valentino Rossi’s Temple. It is here that Valentino dominated the Moto GP seven times running, from 2002 to 2009, after having triumphed in the lower categories (in 1997 with the 125 class. and 1999 with the 250 class).

Where is the Mugello Circuit?

The beauty of the Mugello Track, where “The Doctor” has so often won, in part owes its fame to its geographical position. The track is in fact only a few kilometers away from Florence, one of the most renown cities in Italy, the cradle of Renaissance, art and culture. The Mugello, from which the racetrack takes its name, is in fact an extended, green valley in northern Tuscany. It is a place packed with history and tradition, beautiful natural scenery, and amazing places to stop and eat delicious local food. A trip to the Mugello to see the Grand Prix is the perfect way to have fun and also visit one of Italy’s most beautiful regions. 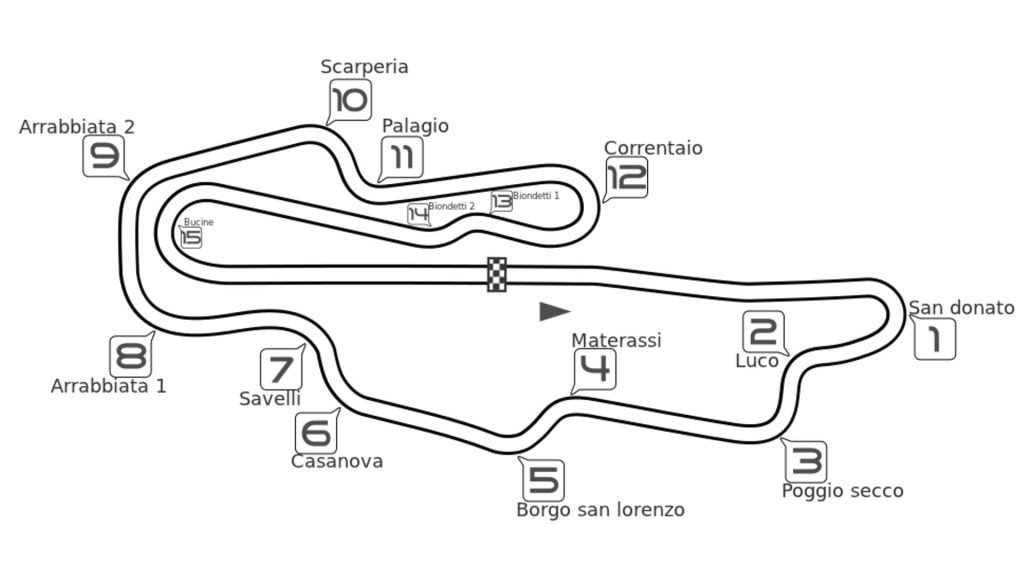 The Mugello Circuit has been voted the best racetrack in the world 5 times over, even after major safety renovations were carried out.  The circuit is 5245 meters long, and has 15 stunning turns, plus an uphill straight of over 1100 meters, which allows motorbikes to reach an incredible 340 km/h. The most difficult turns are the Arrabbiata 1 and the Arrabbiata 2, blind bends that are taken at great speed. The San Donato turn, the first one from the starting point, immediately after the long straight, is also a great challenge: it needs to be taken at top speed, breaking as late as possible.

This track is a complex circuit, difficult to dominate, which challenges the pilots to pull out all their talent. The Mugello Circuit is in fact considered an Academy of Motorcycling: a test bench that will either make or break any future champions.

How to drive the Mugello: Valentino Rossi explains the circuit

Starting on the Friday, the hills surrounding the 5.245 meters of the circuit – described by many as the best in the world – begin to fill with thousands of colorful tents and RVs of all kinds. It’s the wonderful Mugello population: bunches of friends, family parties, young couples, middle-aged people. All ready to be part of the great 3-day party, where making a racket is mandatory!

Each group takes hold of a piece of land, pulling out tables and chairs, BBQs, banners for their favorite pilot. Mopeds are unloaded from the RVs, their mufflers substituted by enormous funnels which let out fire and flames once they are revved up. 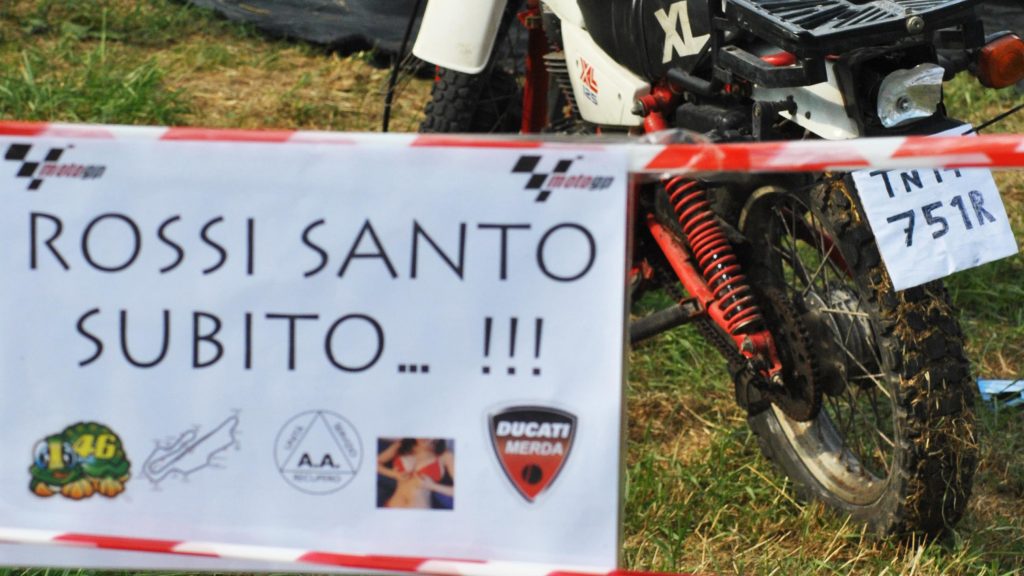 Al Mugello non si dorme (No sleep at the Mugello), This is the motto for this long-awaited weekend.

Friday: by dusk everyone is competing to make more noise than anyone else. Muffler-free mopeds rush along the paths around the circuit making a terrible vroom-vrooooom noise; someone burns an engine; music blasts through the night, people dance madly. if dancing it can be called! Others invent their own personal Grand Prix on board of colorful APEs, obviously rigged up for the occasion. The smell of roasting sausages and steaks fills the air, and wine and beer flow freely.

Saturday: qualify-day dawns. Those who have arrived today enter the circuit and have a hard time finding somewhere to settle, it’s not easy to find a free spot. These are the people who couldn’t make it beforehand because they were working, but now here they are, ready to join the party, ready for a sleepless night!

(The article continues after the gallery) 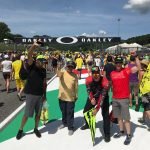 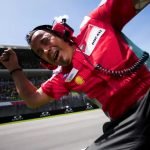 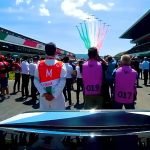 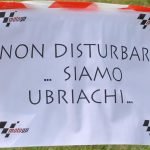 What I have always really liked about the Mugello GP is that there are no barriers between fans cheering different pilots: everyone joins together. For 3 days, till the beginning of the race, everyone is friends with everyone else. I think this spontaneous friendship is common to anyone who enjoys being on a motorcycle – all it takes is the time for a cup of coffee in some place where bikers like to stop, and you quickly make friends with the helmet next to you.

Sunday: everyone sticks to their place (you’ll be in trouble if you leave it even just for a moment!), ready for the race where the fastest pilots on the planet will compete with hard breaking, quick changes of gear, and breathless overtaking. Just before the start of the race – straight after the National Anthem that everyone sings at the top of their voices – the skies over the circuit fill with an ear-splitting rumble, a noise louder that any heard so far: it’s the Acrobatic Italian Air Force Team, the Frecce Tricolori, who salute the Mugello audience with their flying acrobatic skills, leaving a green, white and red trail in their wake, to remind everyone that they are part of a fantastic Italian feast!

Any cookies that may not be particularly necessary for the website to function and is used specifically to collect user personal data via analytics, ads, other embedded contents are termed as non-necessary cookies. It is mandatory to procure user consent prior to running these cookies on your website.